HB22-1113 A BILL FOR AN ACT CONCERNING AMENDING THE APPEALS PROCEDURES IN DEPENDENCY AND NEGLECT CASES TO MINIMIZE DELAY IN ACHIEVING PERMANENCY FOR CHILDREN.

Kaci and Daniel Nice never wanted to foster, until in 2016, when they got into the car after attending a Project 1.27 Info Night and said, “I guess we’re going to foster”. Kaci never intended to get a bill passed into law, either, until she experienced the many delays that often occur between a termination ruling and permanency for a child. Kaci felt strongly that this delay was an injustice to the waiting children in the appellate system and God was calling her to do something to change that injustice. She kept saying, “I don’t know how to do this.” God would respond, “It's ok, I’ll take care of it” and then someone would call Kaci with a connection. This month, Kaci is watching God take care of it as HB22-1113 was unanimously passed in the House and moved to pass unanimously through the Senate as well. 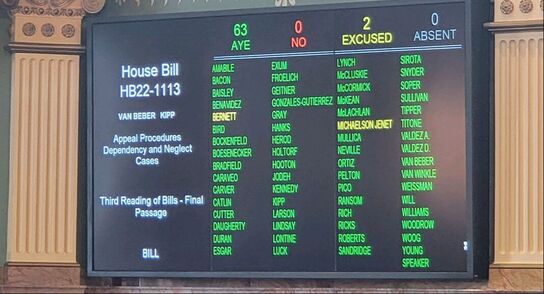 Colorado House Legislative Vote Board
Back in 2018, when Kaci first started working to right this injustice, she was a working mom with two preschoolers, Nicolette, 2 and Deklan, 1. Originally, Kaci’s idea was to get a bill passed that would mandate all dependency and neglect cases would be finalized within three months of a termination hearing. She learned there was already a bill mandating finalization within six months of a termination that was not being adhered to. In 2020, an appellate work group was created to report on why delays beyond six months continued to happen.

Kaci began by calling people until she found someone who would talk with her. Through those calls, Kaci met Rep. Tonya Van Beber, District 48, Weld County who was interested in youth issues and several lawyers, one of whom agreed to help her with bill. Kaci learned that careful crafting was needed to make sure the bill didn’t create other appellate delay issues that might harm children.  Using the existing bill, Kaci worked to develop a well-crafted bill built by getting input from stakeholders who might be for or against the bill.  Kaci talked with people like Melanie Jones from the Office of Respondent Parents to see how the bill would impact parents, Ashley Chase from the Office of Child Representation to learn how the bill might impact children and multiple judges to learn if they would be able to work within a 35-day filing process.  She talked with countless more involved in the process and those on the appellate work group. HB22-1113 includes the provision that termination fillings must be completed within 35 days and that the appellate work group would continue for two more years, file reports and ensure changes are implemented.

Once the bill was crafted, it was time to work with a legislative liaison and talk with senators and representatives on both sides of the aisle. Kaci shares, “If you are passionate about a bill, come down to the Capital and lobby. It changes things. I spent two days outside of committee chambers saying, ‘Hi, I’m a foster mom. Can I talk to you about my bill?’”

On February 22, as the bill was set to go before a House committee, Kaci, Daniel and their children circled around the Capital building seven times in the sub-zero cold, praying for a unanimous decision. Kaci had rounded up several people to testify on behalf of the bill, including Nathan Hoag, Parish Pastor at The Sacred Grace, Englewood and Heather Williamson, another Project 1.27 mom, on the board for CASA, Mesa County. During the testimonies, Kaci shares, “The room was dripping with God. The representatives started to cry, and Rep. Van Beber said she’d never seen a unanimous vote like this before.”   The room erupted in excitement and clapping at the end and even the chair said that even though clapping was not allowed, given the circumstances she understood.  You can watch Heather’s testimony here. God took care of it again!

What’s next for Kaci? Kaci will be lobbying the governor’s office for final approval of HB22-1113. She was invited by Judge Ferman to be on the Appellate Work Group and Kaci is available to help other people struggling with injustice. “If others see injustice, I want to help them have a voice. Now I know many legislators. God has given me the right tools and the right people,” says Kaci.

When asked how we can be praying, Kaci firmly stated, “Praise God for His work! He literally parted the seas. I felt so incompetent, but God just had this from the beginning. He has done everything, every step of the way. I have no doubt the bill will pass. It is His thing. Pray that God’s work can be done through this bill; that kids and families can have hope and closure.” 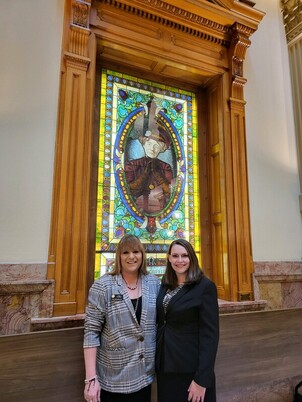